Ironstone Ranch is nestled on a sprawling tract of land just outside of Elizabethtown. As kind of a last hurrah, we took a break from thoughts of moving, drove to Ironstone Ranch, and went on a trail ride. 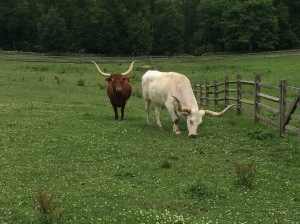 Our friendly guide, Taylor, gave us a quick run down of how to handle our horse.   She allowed us to choose our mounts, helped us saddle up, and then the group moseyed out of the corral. 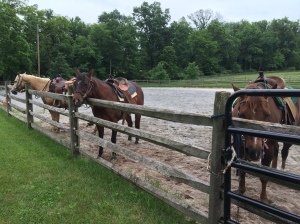 As we meandered through the woods, it didn’t take long to bond with nature. Traffic ceased, city noises dissolved, and the forest encapsulated us. For a while I forgot about moving and all of the packing that awaited us at home. 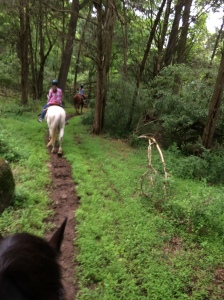 The forest makes its own noise and I listened as the wind whistled through the leaves of the trees. Tall grass swayed back and forth tempting Montana. I pulled on the reins to remind him that snack time would occur after the trail ride.

Hooves pounded on wooden planks as we crossed a bridge. We rounded a bend and spooked a deer. Birds sang, squirrels scurried about, and I felt myself unwind and relax.

Blue spruce dotted the landscape. I drank in the scent of honeysuckle and marveled at the tall pines. Raspberry bushes clogged the sides of the paths and I thought of the pints of jam that could be made from their bounty. The sight of mulberry trees took me back to my youth and that big mulberry tree growing at the edge of the creek on my grandparent’s farm – a tree that I plucked fruit from and ate till I was almost sick.

I swayed in the saddle, my feet shoved in the stirrups, one hand on the pommel and the other held the reins. As the saddle creaked my mind wandered and my imagination kicked in. I allowed myself to pretend that I had been transported back in time to the days of the Wild West.   And I? Well, I was Calamity Jane.

The scene unfolded before me:

Smelling smoke I spurred Montana, urging him to pick up speed. I rounded the corner, emerged from the mountain pass and spotted the farmhouse. Fire licked the roof. Out back of the bunkhouse two men were engaged in a knuckle brawl. Rusty hunkered behind the well; penned down and outnumbered. The men in black shirts fired as they fanned out. Bullets smashed through the well crossbeams. Rock fragments sprayed right and left. I grabbed the reins in my teeth, slapped leather, and came at them firing with fury. The black shirted men jerked their six shooters towards me. Their minds willed their fingers to grip the handle and fire. Hollow eyes cast a shadow of confusion as they looked at their nonresponsive hands. The men blinked then fell.

Montana’s hoof scraped against a rock and the dream faded. I was back in the present. We crossed a rippling brook and the horses stopped for a drink. I smiled, patted Montana’s side, and breathed in the fresh air. For a moment I had been lost in a world that was. I felt refreshed and ready to tackle packing. Well, almost ready. 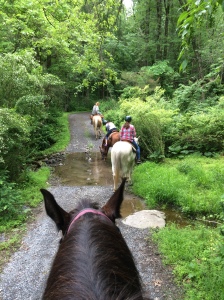 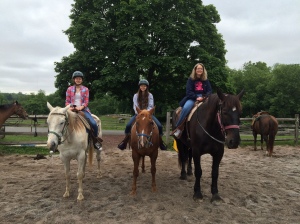