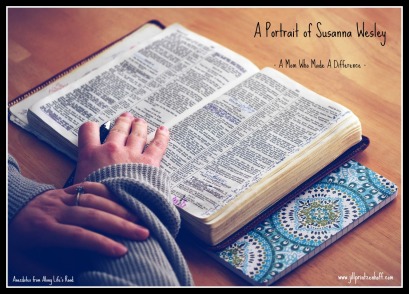 I can’t fathom having twenty-five children. Just. Can’t. Fathom. That! But Susanna Wesley was indeed the twenty-fifth (and last) sibling in her family to be born. And Susanna, in turn, bore nineteen children.

Do you realize how many months Susanna’s mother spent expecting? If she went full term and never had twins, etc., she spent two hundred twenty-five months or the equivalent of eighteen years and nine months WITH CHILD. If Susanna went full term, she herself spent fourteen years and three months with child.

If I thought running a household was challenging enough with my own dynamic duo, how in the world does one stay sane and effectively run their household with so many children under foot and with one always on the way?

Here’s what I learned about Susanna Wesley:

She was faithful to her family—period:

She regularly spent quality time with each of her children:

To do that, she had to know them—on a personal level.

Training her children didn’t end when they left home:

Through everything—she was faithful to God and His calling on her life:

The result of her faithfulness:

Suzanna Wesley—through trials, tribulations, and adversities—was a mom who made a difference.

Her story made me think: At the end of my life, what will I be remembered for? In spite of the times I’ve failed, I pray that the positives outshine the faults, an in the end . . . that I’m truly known as a faithful mom who loved God and her family, and made a difference in her little corner of the world.

** Information from this post—paraphrased, summarized, and quoted—came from reading Lindsey O’Connor’s book Moms Who Changed The World.

*Featured photo is compliments of pixabay.com

2 thoughts on “A Portrait of Susanna Wesley: A Mom Who Made A Difference”

Because we’re all recovering from something.

Photos from Bruce
Wrestling with Faith - Dancing with Jesus